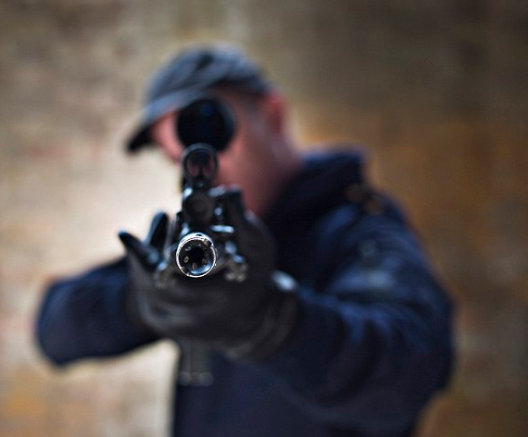 The dogs go ballistic while I’m in the shower and I can tell they’re barking at the front and not the side door. They almost never bark at the front due to all the kids using the side. I open the bathroom door and peek outside the curtain… I can see through the front picture window and outside are 2 cops, strapped with fully auto rifles “crouch walking aka hunting” down my driveway. Wtf I think as I turn off the water and quickly wrap a towel around my waist… running out the bathroom, pounding issues from the side door. Through the kitchen and around the corner to the side door I see both cops aiming their rifles directly at my chest… I make a gesture like really dude, I’m standing here in a fucking towel dripping water while you point that shit at me… yelling through the door he demands to know if a boy named Eric is here? My daughter is in the kitchen freaking out… I yell downstairs to Liam my oldest, “is a boy named Eric down there because I have cops pointing their fucking guns at me, so if he’s down there, get his ass up here now!” “No he’s not… we haven’t seen him in 3 weeks”… I relay the message. Just then my youngest leaves the room and I hear Addey yell, go back to your room Kai, there’s armed cops outside. I tell, Kai go back to your room right now! (Kai goes to his room where he sees another armed cop looking through his window) Cops point their weapons down and asks if I’ll come out to talk. I give him that look again, ya know the, can’t you see I’m dripping wet in a fucking towel look. Grabbing my shoes I step out. Again with “have you seen Eric”… I’m like “no, but why are you at my house armed and pointing your weapons at me?” “We were told Eric stayed the night here.”

(The reason the cops came so strapped was because the neighbors have called the cops on us so much for absolutely nothing, we have what looks like a rap sheet a mile long… these neighbors have literally gone door to door demanding other neighbors call the cops on us daily exactly for something like this to occur, and all because we have my kids friends at the house. These kids do not do anything off the property nor are they loud. They don’t speed, bump music nor litter… the problem is a bunch of them have Black and Brown skin… Neighbors Ricky and Dottie have made an actual campaign of calling cops daily just to make us look bad. We have never done a single thing to these sick minded people, nothing.)

So anyway, the other cop is walking up and down the street sweeping her weapon like she’s under attack. Not only that but somehow the dumb bitch racks her rifle and loses all the rounds right in the street. She’s stumbling around picking ‘em up looking like a total idiot. (I haven’t a clue as to how that occurred due to them being in a clip)

Eventually, they leave as my wife Dr. Julie comes home… she’s livid of course and says fuck this we need to make a complaint. So off we go to the police station and guess who’s at the window. Yep, the guy who was just pointing his weapon at me, and he ain’t having any complaints bullshit. But he does ask if we mind if they search the house. “Um no, you may not enter my home” I reply. On his radio we hear “the suspect was seen at our address”… we bolt out of the station because all 3 kids are home with 2 other friends. I immediately call my daughter and tell her lock the doors and make sure no one leaves the house. Turns out the 2 kids had enough and were gonna split. Mind you, one of the kids were Korean and the other is Black… absolutely looking nothing like the redhead boy in question. We return and again and same 3 cops are there… fortunately they’re not all strapped like earlier. One cop goes to my very cool neighbor, shows him a pic of the redhead boy and proceeds to make a bold faced lie saying he committed an armed robbery. (He did not commit armed robbery, she said this in hope my very cool neighbor would freak out I guess. They leave again.)

(All this time my fuckhead neighbors are eating popcorn and totally enjoying the show… laughing, giggling and patting each other on the ass and sharing tug jobs all around.)

Turns out the boy got kicked out of his house 3 days ago. He may have or may not have stolen his stepdad’s firearms… (if so, why wait 3 fucking days to call the cops eh?)

They come back but this time have another patrol car from another township. They want to check the garage because the boy was seen leaving his backpack with the guns there… it wasn’t there of course.

So to make a long story even longer, these same neighbors have started rumors against us when my oldest was in 1st grade. She told all the parents we don’t feed Liam, make him get up on his own and even walk to the bus stop all alone…. funny because I was at the stop with him every fucking morning and picking him up every fucking evening. Also if you know me, you damn well know I have never ever used food as a weapon nor would I ever withhold any from a hungry person let alone my own son. This bitch has also started other rumors against us throughout the years. We have never once called the cops even when their dumb drunk asses were whooping it up past 3 am, nor when their Harley glasspack idiot friend stops by.

To try and make friends, I have gone to their house to try and help when their huge tree fell across their driveway… I also brought them beer and just left it with them. I didn’t stay; I just dropped off beer as a gift. What do we get in return? Lying, bullying, libelous KKK actions. My kids are terrified to do anyfuckingthing! They have filmed my kids as well as guests who come to our house, and all for what? I can’t for the fucking life of me figure out what the fuck anyone in this house has ever done to them. I still remember the 1st week we moved in. Julie and I took a walk around the neighborhood and tried to introduce ourselves. They didn’t want to shake hands and looked at us like we had a disease creeping along our faces. We are going to go to the deputy sheriff and see if we can put a stop to this. Not sure if it will help considering Ricky seems to burn crosses with all the other blue lives matter folks.

The U.S. Supreme Court Justice Sonia Sotomayor ruled on May 29, 2018 police may not search the area around a private home area, or around a house, known as the curtilage which is part of the home itself and cannot be searched without a warrant even when police think they have seen stolen property on the premises; although the court has long ruled a vehicle can be searched without a warrant if an officer sees something in plain sight. However the Supreme Court ruled police officers must generally have warrants to enter a home’s driveway in search of stolen vehicles… The “curtilage” of a house or dwelling is the land immediately surrounding it, including any closely associated buildings and structures, but excluding any associated “open fields beyond”, and also excluding any closely associated buildings, structures, or divisions that contain the separate intimate activities.