For several days in June 1943, uniformed members of the U.S. armed forces rioted throughout

Sailors, soldiers, and marines with wooden clubs during the Zoot

The L.A. Zoot Suit Riots of 1943 were a targeted attack on Mexican and nonwhite youths

Soldiers display pieces of the zoot suits they tore from Mexican American men during the Zoot Suit Riots in Los Angeles on June 9, 1943.

June 3, 1943
Contrary to popular opinion the “Tacuche” Zoot Suit did not start out in the Mexican community as rebellious acts against society. Friday’s brought an end to long hours toiling at menial jobs and what better way to start the weekend off than by getting cleaned up, stepping into a jazzy ensemble and hanging out with the Eses’. Chicano’s were classy dressers and going to a party or the club was a perfect stage to show off their slick machismo style. The Zoot Suit was the quintessential garment; high waist pants and boxy, roomy coats were flattering, as well as comfortable; the flowing look of the suit was unmistakably flashy on the dance floor giving the appearance of more substance; maybe even help getting some play from the chica’s. 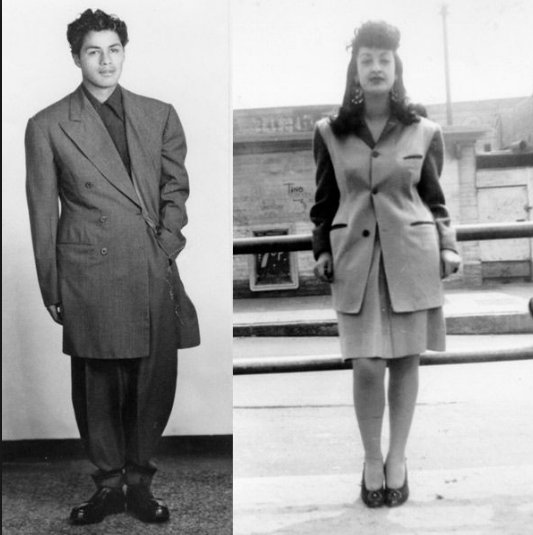 However, the humble parents and elder familia weren’t quite as enamored by the ostentatious and flamboyant zoot suit considering them garish and bringing unwanted attention to the many anti-Mexican middle-class White Los Angelino’s. Soldiers and sailors resented zoot suiters due to the numerous yards of fabric it took to tailor them. Those who wore zoot suits were considered wasteful, unpatriotic and committing a criminal act in opposition to the code of rationing. The servicemen justified their racism as expressions of loyalty and allegiance to the war effort, judging the zoot-suited Chicano’s as un-American. 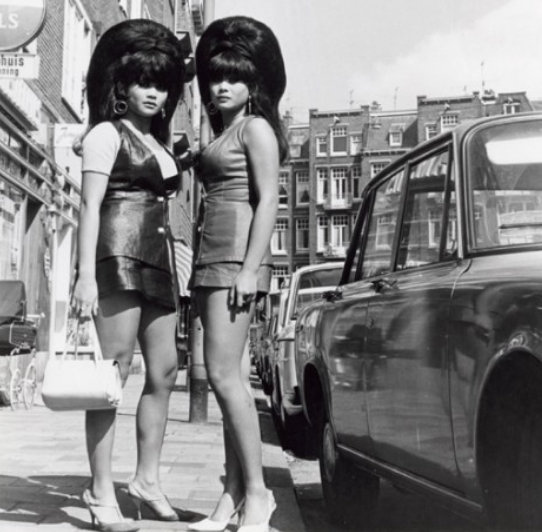 The unwarranted attacks against zoot suiters by servicemen, aided by the manipulation of media generated the impression the majority of crime was committed by zoot-suited gangsters. What originally began as a fashion statement evolved into symbols of defiance, resistance and violence. However what one must remember is the zoot suit wasn’t a Halloween costume, it was an expression of being hip, cool, suave and sophisticated; the zoot suit in and of itself was a form of politicizing independence and the homogenization of American and Mexican culture communicating freedom, confidence and self-determination. 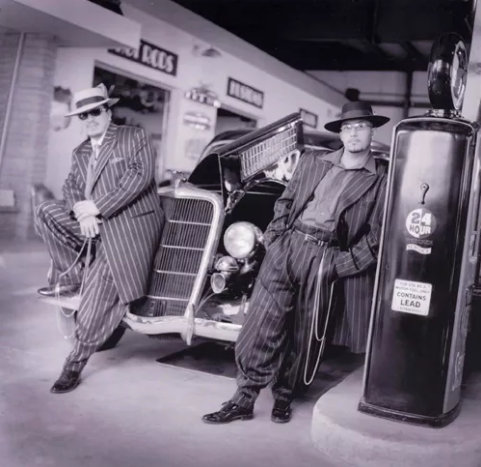 The “Sleepy Lagoon Murder” was the name Los Angeles newspapers used to describe the death of José Gallardo Díaz, who was discovered unconscious and dying on a road near a swimming hole (known as the Sleepy Lagoon) in Commerce, California, on the morning of August 2, 1942. Diaz was taken by ambulance to Los Angeles County General Hospital, where he died shortly afterward, without regaining consciousness. The hospital’s autopsy showed he was inebriated from a party the previous night and had a fracture at the base of his skull. This might have been caused by repeated falls or an automobile accident. The cause of his death remains a mystery to this day. However, Los Angeles Police were quick to arrest 17 Mexican-American youths as suspects. Despite insufficient evidence, the young men were held in prison, without bail, on charges of murder. The trial ended on January 13, 1943, under the supervision of Judge Charles W. Fricke. In 30 years on the bench, Judge Charles W. Fricke reputedly sentenced more criminals to death than any of his colleagues and presided over some of the flashiest cases in Los Angeles. Judge Fricke ruled he didn’t think the boys should have their hairstyle changed” since this would “make it difficult for prosecution witnesses to identify them.” It makes me wonder if having a hairstyle, with its association to the zoot suiter’s and lawlessness, was all it took to end up in jail for murder in 1943. 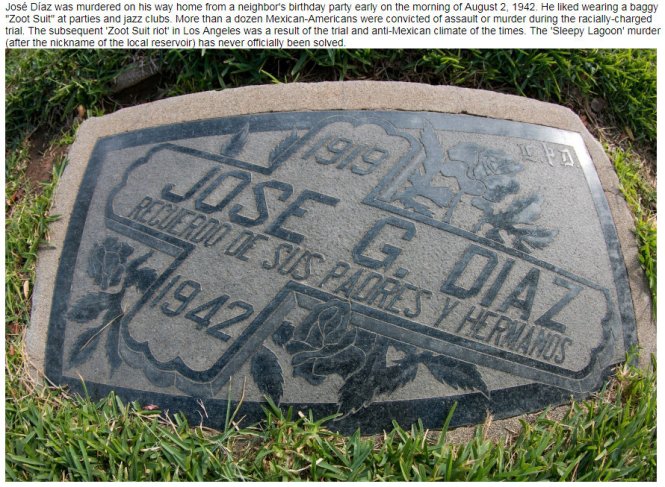 According to White people “They all look alike anyway”, so let’s go back to the beginning; “Mexican’s, who cares, so what”… Within a couple of weeks the Grand Jury was presented with statistics by the sheriff’s dept. According to the report; data gradually increased from a sympathetic angle and escalated to downright racial bias creating a parallel of Latino ancestors crossing the ice bridge from Asia to North America; in essence, drawing the conclusion Mexican’s were cousins to those dirty Japanese who attacked Pearl Harbor. “The Indian, from Alaska to Patagonia, is evidently Oriental in background – at least he shows many of the Oriental characteristics, especially so in his utter disregard for the value of life.”

It’s estimated between 300 and 400 people were arrested but police narrowed their investigation down to 40 members of the 38th Street group. Eighteen were able to retain private representations and acquitted, however, the other 22 defendants were forced to depend on a mere 7 attorney amongst them who weren’t allowed to confer with their clients. Talk about hitting the jackpot…

Nine of the defendants were convicted of second-degree murder and sentenced to serve time in San Quentin Prison. The rest of the suspects were charged with lesser offenses and incarcerated in the Los Angeles County Jail. In October 1944, the state Court of Appeals unanimously decided the evidence was not sufficient to sustain a guilty verdict. It reversed the 12 defendants’ convictions in People v Zammora 66 Cal.App.2d 166. The appeals court also criticized the trial judge, Judge Fricke for his bias and mishandling of the case which is considered a precursor to the Zoot Suit Riots of 1943.

When arrests have progressed through the judicial system to the point which the accused is actually brought to trial, the natural inclination is to believe the defendant committed the crime. Why else would they be on trial? So rather than the presumption-of-innocence, the 22 were tried on the presumption-of-guilt.

The premise of this sentence is zoot suiters are the ones who are supposed to be taught in this fight. It implies xenophobic mindset towards the Latinos because even if servicemen lost a battle overseas, the journalists would not describe it as “learn a lesson”. 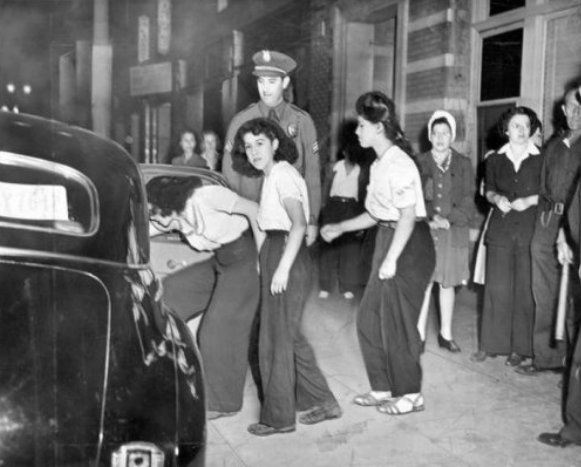 Migrant workers from Mexico were wanted when business was good but were expected to return to Mexico the moment the economy began to falter. The Mexican’s knew if they were willing to work harder, not challenge the political, social, or economic system they could survive in the U.S. although their standard of living would be less than that of the Whites.

The media characterized Mexican’s as simpleminded, gangster delinquents who openly defied US values and customs; the rational being “Mexican Americans had inherited their `naturally violent′ tendencies from the bloodthirsty Aztecs′ of Mexico who were said to have practiced human sacrifice centuries ago” and “would forever retain wild and violent tendencies no matter how much education or training he might receive. What the press neglected to inform the public was between 250,000 and 500,000 Hispanic Americans served in the Armed Forces comprising 2.3% to 4.7% of the Army.

The press having condoned the attacks ignored the fact most of the zoot suit defendants held down ordinary working class jobs and the servicemen who attacked them were deemed heroes both here and abroad. Racial profiling isn’t a new thing nor is the theory of; does it matter who goes to jail as long as we convict someone, anyone…

Interestingly enough, after Japan formally surrendered Sept. 2, 1945 and the US began the recuperation process “Large double breasted baggy suits with high waists, pleated trousers and wide brim hats returned to fashion just as they were in the 1930’s but now with a taste of the zoot in them as well.”